“Operation Hypocrisy” – A Legal Criticism of the Turkish Military in Afrin 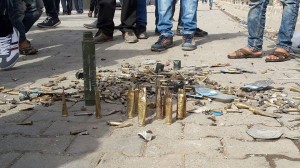 On January 21st, Anadolu Agency, the state-run Turkish news agency, ran a story with the headline “Muslims pray in Mecca for Turkey’s victory in Afrin” implying a positive moral foundation of Turkey’s “Operation Olive Branch” with the goal of securing Afrin district from “terrorist forces”. By using religious context Turkey is trying to justify and glorify a military operation, in alliance with various armed groups inside Syria, attacking civilians, thus violating international law, and reportedly committing crimes against humanity. Calling a military operation “Olive Branch”, the symbol of peace, is a morally cynical and hypocritical agenda when it has escalated an already dire conflict while also endangering civilian lives. Besides the moral controversy of the Turkish Armed Forces (TAF) activities in Syria there are real legitimacy issues with the Turkish legal arguments.

The Turkish Claims of Legality

In their legal justification of their Afrin offensive the Turkish government cited the United Nations Security Council Resolution 1624 (on the prohibition of incitement of terrorism 2005), Resolution 2170 (on condemning human rights abuses by the Islamic State [ISIL] 2014) and Resolution 2178 (on condemning traveling and supporting ISIL 2014) and Resolution 2249 (on the redoubled effort against ISIL 2015) and also the UN Charter’s Chapter VII Article 51 the right to self-defence. However the legal argument for this operation based on the UN legal framework is even less defendable than last year’s Operation Euphrates Shield. Taking a closer look on the documents in order:

UN Ch Article 51: The right to self-defence is a continuously debated subject in international legal circles, unclear and open for interpretation. The US and Israel has cited Article 51 to defend themselves from non-state actors (as Turkey claims now) to justify the invasions in Afghanistan and Gaza respectively. However as it was the case in 2002 with the Afghan War, self-defence doesn’t mean that there is no need for UN approval of countermeasures in case a state is threatened. Turkey needed approval of the UN before any offensive military operation. There is also the issue of proportionality. As in domestic civil law, if I have a strong suspicion that my neighbour wants to hurt or even kill me, I have all the right to defend myself in case I get attacked or make measures to prevent an attack from happening (barricade myself, call the police, ask for help), but I cannot just go over and shoot the whole family because I do not trust them.

UNSC Resolution 2249: Redoubling the efforts against ISIL in Syria was never the strongest part of Turkey’s involvement in the conflict, there were even claims of collaboration, and the Resolution is even more irrelevant in the attack on Afrin due to the fact that it was never under ISIL occupation.

UNSC Resolutions 2170 & 2178: Condemning the support and traveling of ISIL members and condemning human rights abuses by ISIL in Syria is also problematic to apply in this case. There is no ISIL activity in the area and the fact that the collaboration with the war criminals FSA just adds to Turkey’s record of state sponsored terrorism and with military operation just makes their list of crimes against humanity longer. The actions of Turkey in the Syrian conflict undermine its arguments with the current military operation.

UNSC Resolution 1624: The prohibition of incitement for terrorism is universal in the sense that it is not focusing on ISIL and as a result it can be fitted into Turkeys narrative of Kurdistan Workers’ Party (PKK) and the People’s Protection Units (YPG) are one and the same. However the issue is that the UN has no registry or list of its recognized terrorist groups, unlike the EU or NATO or countries like the US. All of these mentioned entities consider PKK a terrorist group, however all of them consider the YPG and the Syrian Democratic Forces (SDF) key elements and member in the fight against ISIL and – bar NATO – in the fight against Assad’s Syrian regime. Turkey can create an argument here, which can be undermined by the context: all its relevant allies –except for the various armed groups inside Syria – consider the YPG and PKK as separate entities. And even if the context would be disregarded by Erdogan (as it is being done) there was still no UN approval for any military operation to be conducted.

The conduct and the aftermath of “Operation Olive branch” provides further moral and legal concerns as there are several, including the UN, reports on misconduct, human right abuses and war crimes committed by the Turkish allied forces and the complicit TAF during the invasion and the ongoing occupation. The potential war crimes committed by the TAF are summarized best by Gokcan Aydogan’s article in terms of civilian casualties: as in theory the fourth Geneva Convention affords protection to civilians, including in occupied territory alongside its additional protocols regarding international conflict the wording of the convention provides a leeway through the rules regarding the proportionality of an attack, the unintentional consequence of an attack or the plausible deniability in the harm of civilians. Due to these legal loopholes the reported 348 civilian casualties in Afrin as a direct result of the military operation, may not receive justice as their status is regrettably can be argued to be in a legal grey area.

The offensive on Afrin, until now a safe space for its original inhabitants and internally displaced people, also led to the exodus of more than 150,000 civilians, adding to the already large number of Syrian refugees and internally displaced persons. However, roughly the same amount of former residents and refugees came to Afrin during the Turkish occupation, mostly due to the distribution of humanitarian aid. The occupation of the predominantly ethnically Kurdish territory is also threatening with an intentional demographic reshuffle, a practice not alien to the region. Some of the Kurdish population also claimed to be forcefully displaced from their homes and “the Syrian Observatory for Human Rights reported that Syrian rebel groups had been relocating newly displaced Arabs from Damascus into Kurdish-owned homes, abandoned in the face of Turkey’s advance.”

This can also provide context to the UN report that cites “high levels of violent crime, with civilians falling victim to robberies, harassment, abductions, and murder,” mostly targeting the Kurdish population sympathetic to the YPG. According to Borzou Daragahi Foreign Policy’s Middle-East correspondent “more than 200 people have been detained … Relatives pay ransoms of up to $20,000 to get loved ones released from makeshift detention centers at the rebel groups’ headquarters. Residents must also sometimes make payments of up to $5,000 to get motor vehicles back. Human Rights Watch last month accused the Syrian rebels of pillaging the homes of Afrin’s Kurdish residents.” The irony of the situation is that the goal of the TAF is to train the rebel groups to police the streets and provide security services for the local population. “One Kurdish resident of Afrin said the rebel units [Turkish allies] pin portraits of former Iraqi leader Saddam Hussein, who sprayed chemical weapons against Kurds, to their vehicles.” Since March 25th, the ongoing YPG insurgency aims to disturb the occupation by claiming responsibility for several guerrilla attacks targeting TAF and the Turkish allied armed forces.

A Moral and Legal Fiasco

All in all, Turkey conducted a morally unacceptable military offensive by undermining the concentrated efforts for stability in the war-torn country of Syria and its suffering population. Erdogan endangers civilians in an attempt to export his domestic political issues into the neighbourhood in cooperation with various armed groups in Syria. Above all the immoral activities, Turkey cannot even justify its actions in international law, further delegitimizing its own actions and highlighting the hypocrisy of the Erdogan regime. The offensive on Afrin is illegal and the conduct of the occupation also violates international law. The question is what the international community and most of all the US will do in a situation when two of its allies, Turkey and the YPG, the backbone of SDF, are in open conflict. The Western dependence on Turkey is undeniable. It is a key NATO member and is relied upon for its resources and logistic support (not to mention the EU also delayed solving its refugee crisis by paying off Turkey). As a result, the Erdogan regime has been able to get away with a blatant invasion and occupation. However, in the eyes of the US, the SDF is also a key ally in the short and even potentially long-term future of Syria. What will happen next to the people in Afrin? Time will tell, but the complex nature of the ongoing civil war seen as a proxy war for international powers like the US, Russia, Saudi-Arabia, Iran and Turkey with their different agendas promises no peace nor stability.

By guest author Laszlo Bugyi (@lazlob84), IR & EU analyst. Laszlo has a Master degree in International Security and Law from SDU in Denmark. His focus is mainly on democracy studies and EU-NATO relations.