Mother, I Am Guerrilla 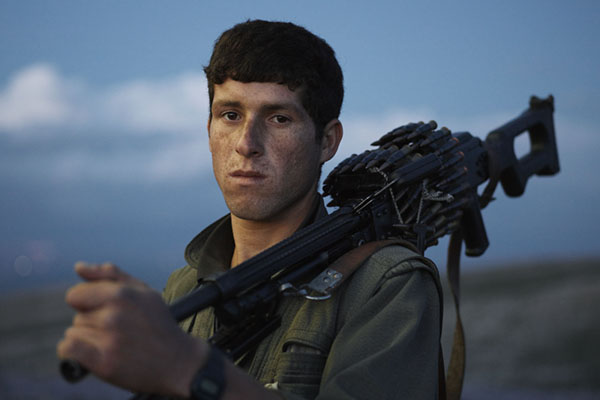 He looked like my father, the grey-haired, tanned Kurdish mayor of a little district made up of only 120,000 people in southeastern Turkey.

To me, most Kurdish men who have fathered children look alike. They are stern. They are sometimes so distant in mind you have to gently tuck on their sleeve to get their attention. They have frowns between their black eyebrows brought about by worry and wonder at the fact that their children, which nature has necessitated and later tradition demanded be pushed out of every able-bodied woman in a steady manner, are born into a country that considers them potential terrorists due to their Kurdish identity.

Turkey is rattling its sword at their unborn children; the ancestral trauma suffered at the hands of the state imprinted onto them as they grow up; their names a security risk whenever they venture out onto the streets that run through Kurdistan, at once their home and their battlefield.

The mayor came to the school one afternoon when the pupils had gone home. He spoke to us about his job as a Kurdish politician, a position that has become increasingly synonymous with separatism and terrorism in the eyes of the Turkish state.

One flag, one people

In reality, the state and the pro-government media have for many decades portrayed individuals and organizations working for the implementation and protection of human rights in the Kurdish region as sympathizers of terrorism or members of terrorist organizations.

Turkey’s strength as a nation lies in its assertion on being united as one people under one flag, an idea and a policy imposed upon the population at the establishment of the Turkish republic in 1923, which have ever since been enforced with varying degrees of violent and fatal means.

Consequently, movements that strongly identified as Kurdish and opposed the state’s efforts to homogenize the ethnically and culturally diverse population were considered a threat to Turkey’s unity and territorial integrity.

A classified bill issued by the Ministry of the Interior in 1930 stated the following in reference to Kurds: ‘The Turkification of their languages, traditions and ideals, associating them with the history and the destiny of the Kurds, is an important national duty for all Turks.’ (1)

The Turkish state anticipated that Kurds would form bodies of opposition in every aspect of public and private life in order to culture and preserve consciousness about the Kurdish identity in the face of assimilation policies. In an effort to prevent Kurds from furthering awareness of their repressed status, the Turkish state took initiatives to impede access to education in areas predominantly inhabited by Kurds. The contemporary Minister of National Education, Necip Bey, voiced the Turkish state’s fear:

Do we want today’s armed Kurds to appear before our children tomorrow as intellectuals?

This sentiment is felt at even more intense level today.

Prior to the attempted coup in Turkey in July, mostly Kurdish and pro-Kurdish academics, journalists and activists were arrested by the Turkish police on charges of sympathizing with the Kurdish armed resistance movement, the Kurdistan Workers’ Party (PKK), which is considered a terrorist organization by Turkey. Many academics were dismissed from their positions at universities simply for signing a peace petition that called upon Turkey to end the violence in the Kurdish region.

Politicians from the leftist pro-Kurdish People’s Democratic Party (HDP) are regularly accused of “promoting the propaganda of a terrorist organization” and currently face terrorism charges. Turkish police has raided headquarters and homes of several HDP politicians in anti-terror operations, subsequently arresting them. The Chief Public Prosecutors in Ankara and Diyarbakir (Amed) have summoned Selahattin Demirtaş and Figen Yüksekdağ, co-chairs of HDP, for questioning but the party leaders have refused to show up as they anticipate arrest.

“It is not only the person who pulls the trigger, but those who made that possible who should also be defined as terrorists, regardless of their title,” Turkey’s president, Recep Tayyip Erdogan said in March, expressing that this encompassed activists, journalists and politicians, too.

The pink walls of the classroom where we had gathered stood in stark contrast to the stories of injustice and harassment that the mayor had been subjected to by the Turkish state. The mayor’s calm demeanor, his gentle way and the lack of anger in his voice rendered the small audience of volunteer English teachers on the school benches silent. As he explained how Turkish prison guards had forcefully thrown him into the snow outside the prison wall on his release day, muffled sobs spread in the classroom.

This was in 2011, the same year when Erdogan in the wake of the Syrian uprising and his staunch opposition against the Syrian dictator began being recognized as a role model for the Middle East due to the boost in the Turkish economy and his promises of peace.

The promises of peace were just that: promises.
During a court case against Kurdish politicians and activists that year, one of the defendants spoke in Kurdish. The judge told the clerk to write:

It is understood that the defendant spoke in an unknown language.

Also that year, 34 Kurdish civilian men, many from the same family and some as young as 12, were killed when two F16 jets bombed them near the Iraqi border. The government later deemed the massacre “an error” and to this day, no one has been held responsible for the killings.

Turkey’s terrorization of the Kurds intensified last summer as the PKK had to resist the ongoing brutal and fatal repression of the Kurdish people. The state has laid siege on several Kurdish cities and towns, leaving civilians without access to medical aid, food, water and electricity. Whole towns have been razed to the ground and buildings burned while people were still in them.

Kurdish politician Hurşit Külter went missing 126 days ago. According to Foreign Policy, a twitter account allegedly connected to someone within the Turkish armed forces tweeted that Mr. Külter had been arrested.

Hurşit Külter, who declared self-rule in front of the cameras, asked for blessings in a sewage ditch. Now he is in hell.

Mr. Külter went missing in Şirnak, a province in the Kurdish region that has been under siege since March 14.

The Turkish state’s indiscriminate attacks have forced 90% of Şirnak city’s population to leave, while thousands are living in tents on the outskirts of the city. Only local journalists have been able to report on the internal displacement as Turkey has barred human rights organizations from entering the area. That is, until they are jailed. Kurdish reporters are regularly arrested on charges of “terrorism” and recently the Kurdish newspaper Özgür Gündem was closed as it was accused of being the mouthpiece for PKK.

The cover-up has allowed Turkey to commit atrocities with impunity, and since the state of emergency was declared following the coup attempt, the government has had free rein to carry out a massive purge leading to the arrest of 32,000 people, according to the Turkish Ministry of Justice itself.

The purge is affecting not only those affiliated with the Gülen Movement lead by the Muslim cleric and enemy of Turkey’s President Erdogan, Fethullah Gülen, that is said to be behind the coup attempt. To Erdogan, terrorists are all the same and the PKK is a terrorist organization to him. 11,000 teachers in the Kurdish region have been suspended, the same have 24 democratically elected mayors; they are all accused of having ties to PKK, some to Gülen. The state has instead appointed its own administrators to replace the mayors in a blatant attempt to actualize Erdogan’s ambitions of expanded presidential authority.

‘They nicknamed me terrorist’

For years but intensifying, the Turkish state has been harassing Kurdish journalists, lawyers and politicians. It has closed their offices and papers. It has promoted rhetoric where “Kurdish activism” is used interchangeably with “terrorism” leaving even children to be labelled terrorists.

In an interview, a Kurdish girl said: ” [At the time of entering secondary school] I began to feel more Kurdish. Because I began to express this more frequently, I was called peshmerga [an armed Kurdish fighter – literally, ‘one who confronts death’]. In high school, they nicknamed me terrorist.” (1)

‘Mother, I am guerrilla’

In the pink classrooms of the school where we taught English to Kurdish children, we used to make one young boy with a beautiful voice sing for us. His name was Savaş, which means “war” in Turkish. During a break where we had gathered in the hallway, he sang to us:

Mother, I am guerrilla
At the top of those mountains
There is no long road between death and me
The martyrs’ blood runs in me

That was in 2011. Savaş is now 19. I cannot help but wonder if he joined the many Kurdish youths who are fighting for their lives against the Turkish state on the streets that run through Kurdistan, at once their home and their battlefield.

1. Report: Scar of Tongue: Consequences of the ban on the use of mother tongue in education and experiences of Kurdish students in Turkey. By Vahap Çoşkun, M. Şerif Derince, Nesrin Uçarlar (2011)