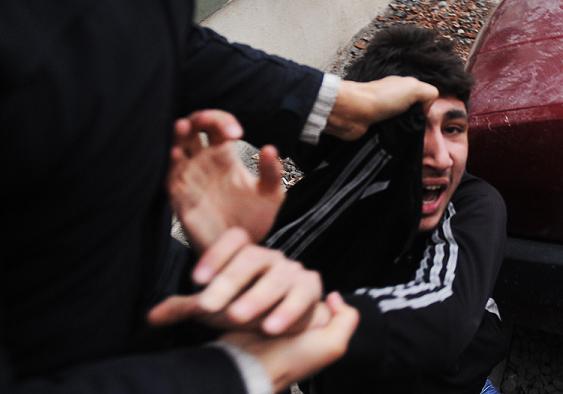 Turkish police arrest a Kurdish boy during a demonsration in main Kurdish city Diyarbakir at Uludere, Sirnak province, near the Iraqi border, on December 31, 2011 as they protest aginst a Turkish air raid. Thousands of irate Kurds buried 35 civilians killed in a Turkish air raid and branded Prime Minister Recep Tayyip Erdogan a murderer. The weeping mourners accompanied the coffins of victims of the strike of December 29 to the cemetery in Gulyazi village, near the Iraqi border, from the nearby town of Uludere where a service was held at the mosque. AFP PHOTO/ BULENT KILIC (Photo credit should read BULENT KILIC/AFP/Getty Images)