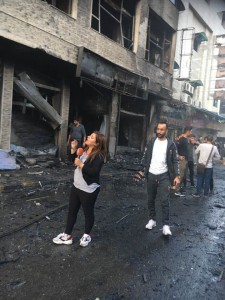 Aftermath of bombing in Qamishlo. Photo by Jenan Jamil Bozo.

Three explosions in the city center of Qamishlo on Monday has left 6 civilians dead and at least 30 wounded, say local reports and AFP. Qamishlo is located in the northeastern region of Rojava near the border with Turkey.

It is currently not known with certainty who is behind the bombings but locals accuse Islamic State sleeper cells. Kurdish security forces Asayish says they suspect pro-regime [Syrian regime] forces of being the culprits behind the bombings. The General Command of the Asayish issued a statement: “Based on information received from private sources, and after our initial investigation, we [Asayish] confirmed that the so-called National Defense Forces (NDF) of the Syrian regime are involved in the blast which happened in Al-Wusta neighborhood in Qamishlo.”

An eyewitness said that he saw two car explode with less than four minutes between the explosions and that fire spread to nearby buildings. The eyewitness says that after turning off the fire, they found two dead people in the cars.

#Breaking: Two car bombs explosions in #Qamishli in Northern #Syria, caused multiple people to be injured and at least 2 people to be killed. pic.twitter.com/KbUUKiTzsN

The first moments of the bombings that hit the Syrian city of #Qamishli, so far 6 dead, more than 30 wounded pic.twitter.com/dffrVtAchJ — MOHAMMED HASSAN (@MHJournalist) November 11, 2019