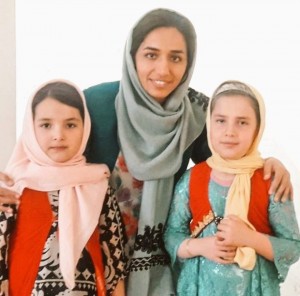 Zara Mohammedi, a 27-year-old Kurdish teacher, was arrested on May 23rd, 2019 by Iranian authorities for teaching Kurdish children to speak and read in their mother tongue.

She was arrested alongside two other teachers, Idris Menbari and Rebwar Menbari; they were released again on May 26th. Ms. Mohammedi allegedly remains detained in a prison in Sanandaj, a city in northwestern Iran mainly populated by Kurds. Further details about her exact location and detainment remain unknown.

On June 4th, human rights activists organized a Twitter campaign under the hashtag “Freedom for Zara Mohammedi” to raise awareness of her arrest, calling for human rights organizations to bring up her case. The activists had furthermore initiated a signature collection as part of the campaign.

Simona Škrabec, the chair of the Translation and Linguistic Rights Committee of the PEN International, condemned the arrest of Ms. Mohammedi:

The Translation and Linguistic Rights Committee of PEN International deplores the arrest by Iranian authorities of Ms. Zara Mohammedi, a volunteer teacher in Kurdish language, and demands her immediate and unconditional release.

State authorities in Iran and elsewhere must understand that diversity of cultures and languages is an asset for any country and that the repression of the linguistic rights of minorities is a sign of the weakness of the state concerned and an attempt to stifle freedom and basic human rights.

Please click here to sign a petition calling for the release of Ms. Mohammedi from detainment at Sanandaj Prison.

The government of Iran is disreputable for its discrimination against Kurds who suffer under arbitrary arrests and harassment.

On September 8, 2018 it was announced that three Kurdish men, Zaniar Moradi, Loghman Moradi and Ramin Hossein Panahi who had been subjected to a grossly unfair trial had been executed by the Iranian regime in the wake of massive protests and condemnations from activists and human rights organizations.

On January 2018, the regime executed a 22-year-old Kurdish man who had been only 15 years old at the time of the crime.

In 2015, the brothers Ali and Habib Afshari were executed by the Iranian regime on charges of “waging enmity against God” through “propaganda activities” and “membership in a dissident group.”

The Iranian authorities continue the deplorable treatment of Zeynab Jalalian, a Kurdish woman who has been imprisoned since 2008 on charges of “enmity against God”. She has stated in a letter that she was subjected to torture and denied medical treatment. Her family has now been banned from visiting her in prison.

"If my mother tongue is shaking the foundations of your state, it probably means that you built your state on my land"#Freedom_for_ZaraMohammadi pic.twitter.com/mjev7H1eGr

Women from minority groups are the most oppressed and silenced within their communities in the #MiddleEast. When they are arrested and subjected to state terrorism the world remains silent as to their oppression and their courage.