Who am I? Kurdistan’s Resistance in Art 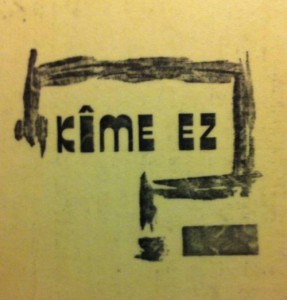 My summers in Syria were hazy but not just due to the heat and the dust swirled up by cars moving fast through the streets. The people of Qamişlo (Al-Kamishli), a city in northeastern Syria lying at the feet of the Taurus Mountains, seemed hesitant and careful. The days and weeks passed by slowly as if to fit the pace of the city’s inhabitants. It was as though they were living life based on the principle of insha’Allah – ‘if Allah wills’. The people were waiting for something but no one knew what it was they were waiting for. They simply lingered in life. Sometimes the tanned delivery boy stood outside our door at 5 o’clock in the morning, pressing the doorbell for twenty minutes to let us know he had brought the newly baked bread. He had time; he was busy, sure, but in Qamişlo no one seemed to be in a hurry.

As a teenager, I was not able to grasp the extent of human adaptation to a life marred by a repressive regime targeting millions of people because of their ethnic background. I have since come to learn that my Kurdish family in Qamişlo willingly succumbed to a quiet life as it was their best means of survival. It was essential not to attract the attention of Syrian officials and if you were a compliant Kurd who did not insist too hard on your Kurdish identity, you would be left alone.

Yet today’s armed resistance movements in all four parts of Kurdistan – in Syria, Turkey, Iraq and Iran – are testaments to the fact that you cannot suppress your identity. You cannot live without being.

I remember a summer when boys and young men on every street corner, in front of barber shops and schools were listening to a sentimental song by Kurdish singer Şeyda on their phones: You don’t know / how empty you’ve left me / you don’t know / how I ask about you to friends.

Listening to Kurdish songs and reading Kurdish poems, one would think that we were a lovesick people; that Kurds are tormented by a consuming passion for the alluring dark-haired beauty briefly descried in a window bathed in moonlight.

But not every Kurdish song or poem lingering on the beauty of a white, heaving bosom is about women. Poets and singers would in order to circumvent bans on the use of the word Kurdistan and the ensuing punishment replace it with the name of a woman, thereby personifying their love for the homeland and making it less threatening to the territorial integrity of the oppressive nations keeping Kurds prisoners. Banning the Kurdish language was just one method out of many employed by the regimes to prevent Kurds from forming and expanding social, political and armed resistance movements.

Despite being subjected to ethnic cleansing, genocide, chemical attacks, forced disappearances, banning of language, restrictions on cultural and social practices, displacements, demolition of homes and entire villages, the Kurds have remained steadfast in their resistance; not just in arms but in arts, too.

The late Mihemed Şêxo, a Kurdish musician born in Qamişlo, was a luminary in Kurdish music and a rebel with a tembûr (a string instrument). Saad Farsu, a friend of Şêxo, told me one summer evening in 2012 that Mihemed Şêxo “was the only one who kept singing about his beloved Kurdistan even though it was not allowed in Syria. He was beaten by the police and imprisoned many times. He was not scared.”

In the preface to a collection of Mihemed Şêxo’s songs, Qado Şêrîn noted that Şêxo was once beaten so severely that his socks were sticking to the flesh of his feet for days. ”He was beaten for his love for his people yet refused to stop expressing this love for Kurdistan through music,“ Şêrîn wrote. ”Artists like him never die“.

But the Syrian police closed his music shop that had been a sanctuary for the people of Qamişlo after having harassed him for years. ”They even took my broom,“  Mihemed Şêxo told my mother with bitterness in his voice one day as they were driving to Hasakeh.

Every story of a Kurd being beaten or imprisoned for his activism for Kurdistan inspired renewed urgency among Kurds to preserve, protect and promote their heritage and identity. Yet with greater awareness came more beatings, more imprisonments, more harassment. Kurds were locked in a battle against authorities and the rules of the low intensity war were unclear: The discrimination against Kurds was legal as Arabization measures implemented in the 1970s were based on the notion that Kurds were a cancer in the Arab body but Syrian officials targeted Kurds in an arbitrary manner, causing uncertainty within the Kurdish community.

It led to a universal conflict: Do I stay silent and alive or do I speak up and risk my life?

To the people who chose the first, literature and music could no longer serve as a means of resistance, only as a modest comfort. When art becomes fearful, it becomes vague and the urgency of the cause it used to serve is lost and the resistance comes to a halt.

The famous Kurdish poet Cigerxwîn chose the latter; he wrote poems that were anything but vague. ”Kîme Ez?“ (Who am I?), he asks in his most notable poem. I am an uprising, a volcano, it continues. It was a poem designed to make Kurds confront their identity which they had so long kept hidden and obscure in order to survive under the rule of the Syrian regime.

Cigerxwîn was born Şêxmus Hesen in 1903 in Batman, Northern Kurdistan (Turkey) but moved with his family to Amudê near Qamişlo. He began writing poems in the early 1920s, assuming the pen name Cigerxwîn which means “bleeding liver” in Kurdish. He got involved in politics and like many before and after him, he was eventually imprisoned in Damascus for his Kurdish activism.

He was one of many voices defying those who were silencing the Kurds. He reminded Kurds, plainly, unadorned, who they were.

Who am I?
A Kurd from Kurdistan
An uprising, a volcano
Made of dynamite
fire and flames
I am red like ember
reaching its limit
When I explode
the world quivers
This spark and fire
eliminate the enemy
Who am I?

I am the people, I am the dragon
From the deep slumber I have now awoken
Like a man
Like a lion
I will raise my head
hold it high
To the world
I will speak
of Marx’ path
of Lenin’s path
Son of Guhderz and Ferhad and Rustem
Son of Salar and Şêrgoh and Deysem
Stand tall
Tall like a giant
I am light-handed
Freely I say
I want to urgently
move forward
Who am I?